But... that wasn't how it worked out. By the start of my last year of school, I was done with all of my math requirements. I was taking English courses left and right, trying to get as much as I could to transfer to a four-year university. For some reason, a bunch of my friends were taking an introductory class, so I signed up for it too. Statistics was the one subject from all of my math classes that I felt was the easiest. It ended up being a fun class.

Then the last semester rolled around. My last semester before all of my friends and I went our separate ways. I had been accepted to Appalachian State University. Two of my friends were going to WCU, another to Chapel Hill, one to NC State, and one to LR. This had me really wanting to spend as much time with them as possible. Since most of my friends were going to study either business or engineering at their universities, their future degree programs required a calculus class. They decided to take the calculus class at the community college and then transfer the credit to the university. 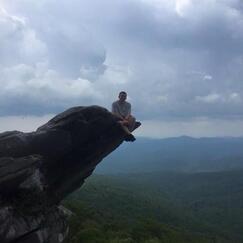 After a hike up Rough Ridge!
I decided that, as dreadful as calculus sounded, I'd sign up for their section so we could have one more class together. I didn't need the class at all, and if I started to fail it (which I expected), I would just drop the class and have no worries. I signed up for enough English and Psychology classes that I would still be a full-time student with or without the calculus class.

For some weird reason, I loved the class. It was a combination of being with all of my friends, a really cool teacher, and even though the meaning of the material didn't make sense to me, I understood how to complete derivatives and integrals. I ended up helping my friends with their homework almost every day after class, and making up problems for them to try.

At the same time, I was enrolled in an English class with a hilarious teacher. Late in the semester, she was talking about her former life as a high school English teacher, and she commented, "and if any of you are thinking about becoming English teachers, meet me in my office hours for an intervention." A few weeks later, I stopped by her office to ask a question about an assignment, and I casually mentioned, "do you want to have an intervention with me, since I want to teach English?"
That's how I got onto the path that I'm on. I originally enrolled in a secondary English education program at App State. Fortunately, I was able to change my major to secondary Math. I started at App in the fall of 2014. While at Appalachian State I was a member of the ACES (Appalachian Community of Education Scholars) residential community, as well as a Resident Advisor for Honors College students for two years. In my free time I would likely be found either relaxing in the library or volunteering for the Office of Multicultural Student Development (MSD). Volunteering with MSD was my favorite part of being a student in college, because I got to plan events with the Multicultural Center, LGBT Center, and Women's Center that promoted diversity and inclusion for students at Appalachian. I made a lot of friends and learned a lot about different kinds of people while volunteering with MSD.

As part of my final semester of college, I had to complete a semester of student teaching. The placements are generally random, and I was placed at South Caldwell High School, right around the corner from where I grew up. My student teaching experience was remarkable, helping me to fall in love with teaching math and with the student body from my home town. I made up my mind that I wanted to teach in my hometown area because of how much I loved working with the student population here. .

I graduated from Appalachian with a Bachelor's of Science in Mathematics, Secondary Education in the Spring of 2017. Shortly thereafter, I was hired into the Spartan Family to teach you all the wonders of math!